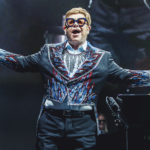 Christmas in America is a time for family togetherness and glitzy commercialism, and New Yorkers were treated to both on Tuesday (Nov. 22) night when Elton John, his husband David Furnish and children Zachary (11) and Elijah (9) helped unveil the Saks Fifth Avenue holiday display.

Inside Elton John's Dodger Stadium Show: 5 Takeaways from the Last U.S. Stop on His Final Tour

A police barricade stopped traffic on (the rather busy) Fifth Avenue at 49th Street in Manhattan while a grand piano was wheeled into the middle of Fifth Avenue around 7 p.m. E.T. as onlookers – who were expecting a holiday display reveal but not a Rock and Roll Hall of Famer – marveled. After some introductory remarks from Saks CEO Marc J. Metrick, who announced that Saks was giving a $1 million donation to the Elton John AIDS Foundation’s Rocket Fund, Sir Elton took his rightful place behind the ivories.

“It means a great deal to me to have your support,” John said of the donation. “Thank you so much. I’m so thrilled to kick off the holiday season tonight and to be a part of this spectacular and iconic window unveiling and light show.” At that point, Furnish brought the boys up to join Elton for a family countdown to the big reveal.

Sir Elton – who just played the final North American show of his Farewell Yellow Brick Road Tour on Sunday (Nov. 20) – treated lucky onlookers to a one-and-done performance of his Billboard Hot 100 breakthrough single “Your Song,” a top 10 Billboard Hot 100 hit that began his imposing run on the chart back in 1970 (No hyperbole: We’re talking 29 top 10s, nine No. 1s on the Hot 100).

After reminding audiences why he remains such a treasure with his live prowess and inestimable gifts, Elton joined his family in a seated section of the crowd to watch the lights show. The window extravaganza included a fitting nod to John via a several rocket ships on pistons while seasonally shaded lights tripped the light fantastic on the building’s façade. A medley of Sir Elton’s hits accompanied the display, which found John and Furnish bobbing their heads to “Step Into Christmas” and “Cold Heart (PNAU Remix).”

As fireworks exploded above Saks Fifth Avenue, there was a moment when John reached up to scratch his head – it was almost certainly a biologically motivated move, but it seemed fitting that it occurred when his gentle ballad “Your Song” (playing in its studio version) blasted over speakers to accompany pyro above one of New York City’s most iconic and high-end department stories.

As John detailed in his marvelous memoir Me, he was fortunate enough to happen upon Bernie Taupin’s lyrics to “Your Song” as a struggling artist and was subsequently inspired to compose a melody to match the unabashed sincerity of the words. The idea – heck, the reality – that 50 years later, this gentle ballad would soundtrack an explosive holiday display that temporarily shut down one of the busiest metropolitan areas on earth is remarkably unlikely. But then again, John’s life has been unlikely.

As the fireworks faded and crowd dissipated, John can rest assured one of thing: even as he wraps up, he continues to deliver – and leaves us hungry for more treks down the yellow brick road. No matter how brief.